MAKE ROOM — Dan Cummings, Officer-In-Charge of the Jackson County Drug Task Force, will have to make room on the shelf for the Task Force's latest award from the Missouri Narcotic Officers Association.

Award Earned For The 5th Time In 10 Years

The Jackson County Drug Task Force has earned high praise from its peers in law enforcement yet again. During the organization’s annual conference last week, the Missouri Narcotic Officers Association (MNOA) named the task force the “Law Enforcement Unit of the Year” for 2020.

The MNOA has now given the Jackson County Drug Task Force its highest honor five times in the last 10 years. The Association has 500 active members across Missouri but emphasizes on its website “all police officers are narcotic officers.”

“We certainly appreciate the recognition coming from our fellow officers in the state,” Drug Task Force Officer-In-Charge Dan Cummings said. “I believe this, as much as anything else, signals we are being effective pursuing the drug traffickers who try to bring their poison into Jackson County.”

The notoriously camera-shy Cummings, a longtime narcotic officer with the Independence Police Department, added, “Of course, because of the nature of our work, we try to avoid being recognized, but it’s nice when those in your profession give you a pat on the back and tell you you’re doing a good job.”

The Jackson County Drug Task Force consists of detectives and other personnel from 12 area police departments, as well as the Jackson County Sheriff’s Office and Missouri Highway Patrol. The Task Force receives more than $2 million in annual funding from COMBAT.

“The Task Force conducts investigations on a scale that would be beyond the resources of any one of these local 12 police departments,” COMBAT Director Vince Ortega said. “The Task Force has, to its credit, changed with the times because the nature of drug trafficking has really shifted in the last 25 years. We now have international drug cartels supplying most of the illegal drugs in our communities.”

Because many of its investigations now involve the Drug Enforcement Administration (DEA) and/or the FBI, resulting in federal prosecutions, the Task Force’s contributions can often be overlooked or underappreciated locally.

“Who is to say how many lives the Task Force saves by confiscating what might have otherwise been someone’s lethal dose of meth or heroin?” Ortega said.  “I very much consider what they do—apprehending these high-level criminals profiting off the suffering of those who have addictions—to be an extension of COMBAT’s mission to be prevent substance abuse.”

The 2020 MNOA award was originally scheduled to be presented to the Task Force a year ago, but the COVID-19 pandemic caused the Association to cancel its March 2020 conference. Oak Grove Police Chief Bryon Price nominated the Task Force for the “Law Enforcement Unit of the Year” honor in late 2019, citing what would be a record-setting year of $30.4 million in seizures.

Price noted the collaborative efforts of the Jackson County Task Force, FBI and DEA to conduct numerous Organized Crime Drug Enforcement Task Force investigations. These investigations were either initiated by or led by the Jackson County Task Force. They each led to large seizures of drugs, firearms and cash, in addition to multiple arrests. “Operation Slippery Roads” spanned 17 months (February 2018 – June 2019) and resulted in 84,971 grams—more than 187 pounds—of methamphetamine being seized or purchased in “controlled buys” by undercover detectives.

Between them Operations “Slippery Roads” and “Dirty Ash Tray” resulted in 40 defendants being indicted in federal courts on more than 90 charges—with the investigations extending far beyond Jackson County to Phoenix and Los Angeles, then into Mexico.

“The Jackson County Task Force is really making a difference in and beyond Jackson County,” Ortega said. “I congratulate Dan and his staff for winning this award and want to tell them to just keep up the good work.”

“The Task Force conducts investigations on a scale that would be beyond the resources of any one of these local 12 police departments.”

The Jackson County Drug Task Force had never before seized more than $20 million in illegal substances in a single year. But the Task Force discovered nearly $12½ million worth of  methamphetamine during a single search last fall as that record-setting day led to what would be a record-setting year in 2019—with $30.4 million in illegal substances confiscated or purchased in “controlled buys.” COMBAT Director Vince Ortega emphasizes most of those drugs were seized before they could be distributed on the streets, “which is when we would see the surge in violence associated with drug trafficking.”  Therefore, he says the COMBAT-funded Drug Task Force is “very much an anti-violence task force too.”
» MORE 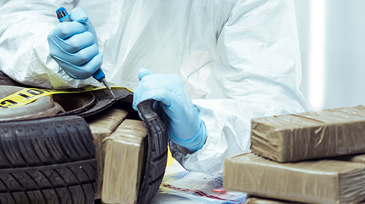 The COMBAT-Funded Jackson County Drug Task Force seized 144 pounds of methamphetamine during a recent search of a Kansas City property. The drugs, valued at more than $12 million, were hidden in metal containers that were sealed inside four tires. Task Force Officer-In-Charge Dan Cummings believes the meth—the largest amount the Task Force has ever recovered at one time—was probably within a day of being distributed for sale throughout the metropolitan area. "I don't think anyone was going to sit on that much meth for very long," he said.
» MORE