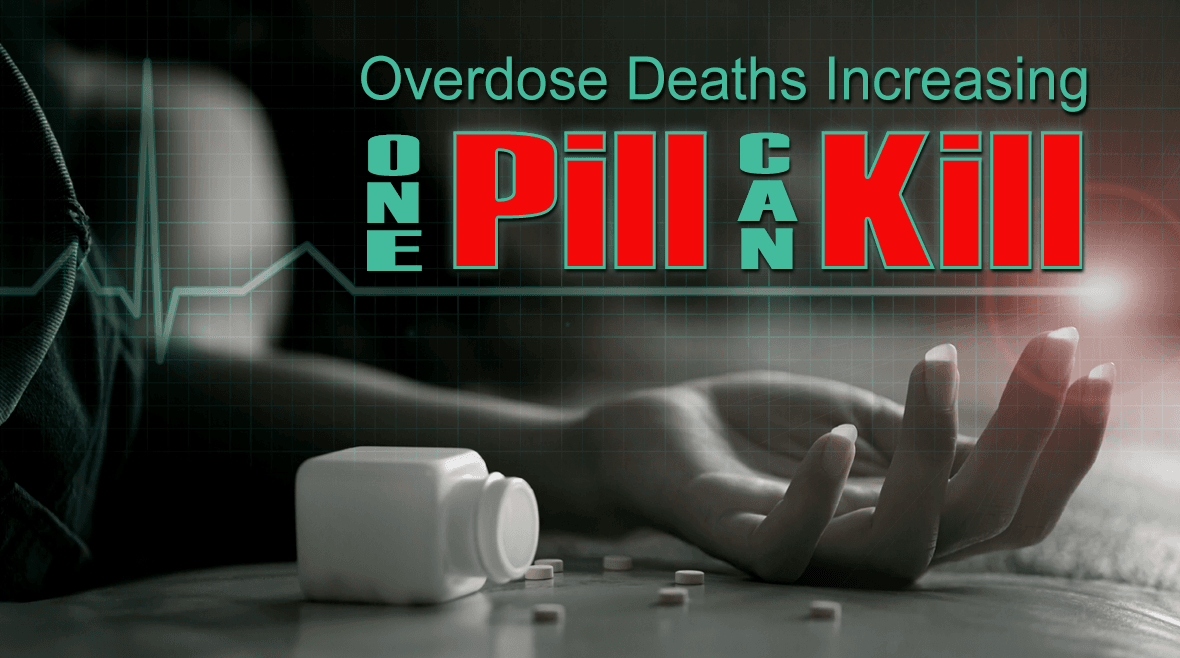 In 2020 the Jackson County Drug Task Force recovered 3,228 pills laced with fentanyl. Each and every one was a potential “poison pill,” warned the Task Force’s Officer-In-Charge, Dan Cummings.

We stressed on our website in the fall of 2020 the seizure of these pills “sounds alarms.” The proliferation of the fake pills posed—and continues to pose—an increasingly deadly threat. Just how deadly has been borne out in data the Missouri Department of Health & Senior Services (DHSS) has collected:

• Between 2019 and 2020, overdose deaths attributed to fentanyl in the Kansas City metropolitan area rose 149%.

• From 2019 through 2021, overdose fatality rates increased across every region of Missouri—across each age group and among both males and females.

Five months ago we again rung the alarm, stressing that in Jackson County counterfeit pills were “widely available” and becoming even “more lethal.” And as 2021 drew to a close, the number of fentanyl pills the Drug Task Force seized in our county reached 12,943 for the year—a 301% increase compared to 2020.

“This is a very dangerous situation because the people buying these pills don’t know what they’re getting,” Cummings said after The Office of National Drug Control Policy recently released statements about rising fatal overdose rates across the Midwest High Intensity Drug Traffic Area (HIDTA).

“We’ve got people getting killed,” Cummings continued, “and drug traffickers don’t care just as long as they can keep making money.”

A LETHAL DOSE OF FENTANYL COMPARED TO A PENNY

Ingesting two milligrams of fentanyl—that’s only seven hundred thousandths of an ounce (0.00007)—is enough to kill a person. The synthetic opioid can be used essentially as a filler in producing counterfeit pills that drug dealers pass off as legitimate, though illegally-obtained, prescription medications.

In addition to fake pills, the Jackson County Drug Task Force has also recovered fentanyl mixed with methamphetamine. This fentanyl-meth combination has been distributed widely in the five-state region in plastic bags featuring a “red lips” logo. (HIDTA IMAGE)

The red lips might have been a metaphor for “kiss of death” as a series of overdoses in the Midwest in January were traced to the fentanyl/meth that came from these baggies.

Fentanyl has become what you might call the choice additive for drug dealers, despite the often deadly consequences. They use it because its potent and lowers their overhead costs when manufacturing counterfeit pills or mixing fentanyl with other drugs, such as heroin, methamphetamine and cocaine.

Why Is Fentanyl So Dangerous?

As the Federal Drug Enforcement Administration (DEA) points out, “Producing illicit fentanyl is not an exact science.” And drug dealers often get it wrong. DEA analysis has found counterfeit pills with fentanyl content ranging from .02 to 5.1 milligrams—with 2.0 milligrams being considered a lethal dose depending on a person’s size, tolerance and previous usage.

The odds of not getting a “poison pill” with at least 2 milligrams of fentanyl is probably not much better than 50-50. Of the counterfeit pills the DEA tests, 42% contain a lethal dosage—or more.

Too much fentanyl—and, again, too much is actually very little—can cause a coma and respiratory failure leading to death.

The synthetic opioid is being blended with various other opioids, including brorphine, to create a drug law enforcement agencies have sporadically encountered, Brorphine/Para-Flurofentanyl (pFF), which is more commonly referred to as “Purple Heroin.”

The aptly named mixture “Grey Death” has been in existence since at least 2017 and blends opioids with both binding agents, chemicals and other illicit drugs. The Grey Death cocktail often includes drugs that are each individually more potent than heroin, the most prominent being fentanyl.