From The Office Of National Drug Control Policy's "Parents The Anti-Drug™" Initiative (theantidrug.com).
Rape Drugs
Rohypnol® (roofies) and GHB are central nervous system depressants. Both drugs emerged in the early 1990s as "drug-assisted assault" drugs. In the news, these drugs are more commonly known as "date rape," "drug rape" or "acquaintance rape" drugs. Due to the abuse of these drugs, Congress passed the "Drug-Induced Rape Prevention and Punishment Act of 1996," making it illegal to bring Rohypnol or GHB into the U.S. The law also increased federal penalties for use of any controlled substance to aid in sexual assault. 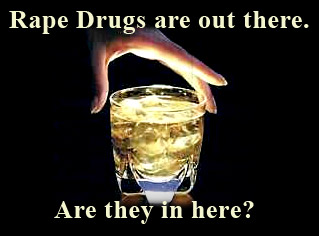 Whether going to a party or on a trip with friends, it is important that everyone be aware of roofies and GHB, how these drugs are used and how to protect yourself. While often associated with alcoholic beverages, these drugs can also be slipped into a non-alcoholic drink.