Law enforcement officials across the nation are more and more frequently seizing ecstasy pills obviously intended to grab a child's attention. The pills strongly resemble children's chewable vitamins. They come in various shapes, bright colors and often depict popular cartoon characters, such as Homer or Bart Simpson and the Smurfs.

"The goal is pretty obvious: to entice a kid to try the drug, thinking it's something harmless, even something fun," says Ortega, a former supervisor of the KCPD Drug Enforcement Unit.

Raising Awareness
The Federal Drug Enforcement Agency (DEA) began raising awareness about ecstasy tablets shaped like Snoopy and Bart Simpson in a June 2009 bulletin issued to law enforcement agencies across the nation. A month later, a U.S. Border Patrol dog discovered more than 46 pounds of the pills stuffed in a suitcase on a bus in Harlingen, Texas. 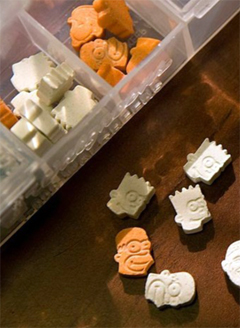 How many pills would that have been? Consider this: Approximately 200 ecstasy pills, seized in another Texas arrest, tipped the scales at around 63 grams, about 0.1 pounds.

Anyone taking ecstasy could suffer seizures and/or a spike in blood pressure or heart rate - any of which could prove fatal.
Contact Us
Funding Formula
STRIVINTogether
Project Rise
Jackson County, MO - Combat Website