The nine-member COMBAT Commission once again has nine members.

Alfred Jordan, Stephanie Burton and Elizabeth Williams have been named new COMBAT Commissioners, filling vacancies created in recent months—one by the passing of Charles (Gene) Morgan, the other two by resignations.

“Our COMBAT Commissioners represent the citizens of Jackson County and have always done all they could to help COMBAT fulfill its mission,” said COMBAT Director Vince Ortega. “Their input is essential to establishing goals for our anti-drug and anti-violence initiatives. They, of course, also make recommendations to the County Legislature regarding all requests for COMBAT funding.

“I look forward to working with our three new Commissioners and continuing with the three who have been reappointed.”

In 2018 county voters approved a ballot measure placing oversight COMBAT’s day-to-day operations under the Jackson County Prosecutor’s Office. The County Executive, however, continues to appoint COMBAT Commissioners, and the County Legislature is the final authority regarding final approval of the Commission’s funding recommendations.

Stephanie Burton and Elizabeth Williams are, respectively, the new District 1 and 3 members of the COMBAT Commission.

Burton worked as a private criminal trial attorney for eight years, until March of 2019, when she became a Senior Assistant District Attorney in Wyandotte County, Kansas. Prior to attending law school at the University of Missouri-Kansas City, Burton was a Missouri Department of Corrections probation and parole officer in Kansas City.

Williams is an education consultant, whose extensive volunteerism dates back to the mid-1990s. She has served as a student mentor; a Connections to Success Kansas City mentor, providing trauma-informed support to women involved in this Department of Justice program; coordinator of an initiative to reduce littering in Kansas City’s urban core; and as a youth coordinator and community organizer. Her background also includes serving as the City of KCMO’s 311 Action Center Associate Director and working in management/associate director positions for AIG Insurance.

The COMBAT Commission meets at least once per quarter.

“I speak for the entire staff in welcoming our new commissioners,” Ortega said. “These are challenging times. Working together, we can brighten the future.” 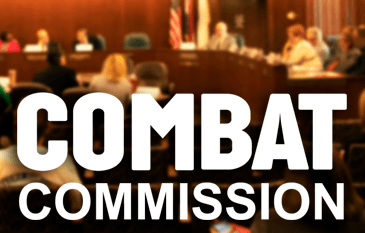