Despite COMBAT Funding For Programs Focused On Helping Survivors Recover From Gunshot Wounds, ‘There Are So Many Barriers To Healing’
Since the end of 2016, there have been more than 2,000 non-fatal shootings in Jackson County. This is the story of one survivor—“Lisa”—as she deals with the “harsh realities” of trying to make a full recovery.
Joe Loudon • COMBAT Communications Administrator

“It isn’t anything like what you see on TV shows.”

Lisa speaks softly about how gun violence became for her a real-life experience just a few weeks ago.

Plywood now covers the windows in two of the bedrooms in the Kansas City house she rents. Tear gas canisters shattered the glass. Lisa can only guess what caused all the holes, large and small, in the walls and ceiling—what’s left of one door—as police used force to end the hostage crisis before anyone else could be hurt.

Even standing amidst the damage done to her home, Lisa is quick to smile. “I’m blessed,” she says. “I really am.”

Then, her smile fading, Lisa’s eyes fixate on the open doorway. She reveals—very matter-of-factly—“I was standing right over there when it happened.” Right over there in the hallway outside the bedroom? She nods her head. Could that hole, a smaller one in the stairwell wall, be from the bullet?

Lisa doesn’t remember the pain, or she chooses not to talk about it: “I don’t know what I felt. A lot was running through my mind—mostly my family. You just don’t know at that moment if you’re going to be OK.”

Less than two months have passed since Lisa was held at gunpoint in her own home. When the man she had once been in a relationship with pulled the gun’s trigger, the bullet struck her in the lower abdomen. It entered near the naval, exited out the side and miraculously caused no critical damage during its violent trespass through Lisa’s body.

Her wound didn’t require invasive surgery. Lisa would, in fact, be released from Truman Medical Center the next day. As part of her care, she underwent an initial assessment to determine how vulnerable she might be to developing long-term Post-Trauma Stress Disorder (PTSD). Such assessments have been offered all gunshot wound (GSW) survivors treated at Truman Medical Center/University Health (TMC/UH)—once their physical injuries are stabilized—as part of the COMBAT-funded Project RISE initiative.

RISE stands for Responsive Individualized Support & Early Intervention. The Early Intervention begins with a voluntary assessment and providing immediate “Psychological First Aid” to GSW victims. Other more extensive and long-term mental health care is also made available through Project RISE to those needing or requesting it.

Lisa “never imagined” PTSD care would be so readily available to someone who has been shot. She’s one of 295 patients screened for PTSD risk—since Project RISE’s introduction in September of 2019—after getting care at TMC/UH for a “bullet-to-skin” injury. 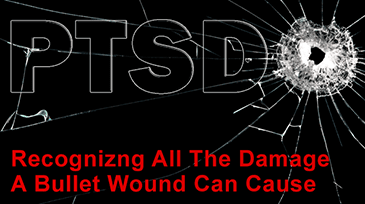 Trauma surgeons can describe in graphic detail the bloody horror bullets inflict when they pierce the skin and violate the body. But for individuals fortunate enough to survive a gunshot wound (GSW), recovering physically might be only half the struggle. “To not address the psychological trauma done to survivors puts them at grave risk,” stresses Jackson County Prosecutor Jean Peters Baker. Project RISE, a COMBAT-funded program at Truman Medical Center/University Health, focuses on helping GSW survivors make a full recovery. Since Project RISE was introduced in September of 2019, nearly 300 survivors of gun violence have been screened for Post-Trauma Stress Disorder and received Psychological First Aid.
» MORE

“Although a case might never be passed along the to the Prosecutor’s Office for charges, that doesn’t mean there isn’t anything we can do to help these crime victims become crime survivors who are better able to get on with their lives.” The Caring For Crime Survivors program—created by the Prosecutor’s Office and operated in partnership with the AdHoc Group Against Crime, with funding from COMBAT—can provide referrals to counseling and facilitate repairs to property damaged during a crime. AdHoc has many of the doors pierced with bullets transformed into artwork.
» MORE

“I went into shock when this happened. I’m still in shock.”

“The majority of the gunshot wound victims we screen receive crisis invention,” says Dr. Williams, a clinical psychologist with the TMC/UH Behavioral Health Unit and an assistant UMKC Psychology professor. “We have folks on-site to provide that support right away, and that’s become pretty much our universal practice.

“We really try to prioritize getting that care to those who are high risk for PTSD, but we have been fortunate to staff the program so that whether a person is high risk or not we can still provide some level of crisis intervention help. There can be psychological issues related to trauma beyond just PTSD.”

Thus far, Lisa doesn’t believe she needs ongoing care for either the physical or possible psychological impact of her wound. “I’m in the process of healing,” she says. “I’m doing very good. I’m still walking and talking—still breathing.”

Yet, she adds, “I went into shock when this happened. I’m still in shock.”

Here’s something else rarely seen in a TV crime drama.

Getting Lisa’s house back in order, so it can be the home she’s come to love the last several years and not a constant reminder of one horrific day, is going to be a daunting, painfully slow task—even with assistance from the Caring For Crime Survivors program. COMBAT also funds this program, which the AdHoc Group Against Crime administers in partnership with the Jackson County Prosecutor’s Office. In addition to providing referrals for counseling, Caring For Crime Survivors helps repair the property damage gun violence can do to a survivor’s home or vehicle. (A Kansas City Police social worker referred Lisa to AdHoc.)

First, it may be weeks before the sunshine can be let back into her bedrooms. The contractor who accompanies Mims into Lisa’s home estimates it might be a half-year before he has the necessary supplies to install new windows. “All supply lines are running way behind due to COVID,” he explains.

And putting in new windows was supposed to be the easy part. Mims plans to contact other contractors and explore what options might be available through hardware stores “if the windows are a standard size.”

Lisa, meanwhile, has been searching You Tube for a video that will explain how to effectively clean tear gas residue. “You can still smell it,” she says.

Only a professional cleaning might—just might—be able to do that job, Mims warns Lisa.

“Tear gas can get inside the walls, in the insulation,” he says. “Sometimes the carpeting has to be ripped out. It can also get into the motors of a ceiling fan, so they might have to be replaced because if you turn the fans on you could recirculate the gas.”

Then there’s the beds. The mattress and box springs are currently turned on their sides. Mims doubts they can be cleaned well enough to ever be fit for sleeping on again.

Local police departments make hundreds of referrals to Caring For Crime Survivors each year, and COMBAT allotted $278,676 for the program this year. With so many referrals and only so much money, the cap per survivor is $1,500.

“We have a lot of cases like hers,” Mims says of Lisa. “We have to try and raise additional funds, partner with other agencies.”

Between cleaning, repairs and likely replacing the beds in Lisa’s home, Mims estimates the price tag might exceed $10,000. The more cost-effective option for Lisa, he says, may be relocating.

Grateful To Still Be Alive

But moving presents a whole other set of issues. Her rent right now is affordable, although Lisa is also a victim of COVID-19’s economic crash. She was laid off from her job this winter.

Mims sits on the Habitat for Humanity of Kansas City’s board and believes Lisa would be an ideal candidate for one of the organization’s houses. But few houses are currently available; progress on getting more ready is being hampered due to supply shortages and high lumber costs; and the Habitat for Humanity’s waiting list already has more than two dozen families on it.

While Project RISE has been able to administer “Psychological First Aid” to eight in 10 gunshot wound victims it screens, Dr. Williams emphasizes “disparities in economic opportunities and a lot of disparities in housing” pose significant risks to many of these individuals’ long-term mental health.

“I think the biggest challenge we’ve had during the pandemic is just getting people to additional resources,” he says, “resources outside of the health care system that might be available to them to mitigate some of those disparities in their lives. It’s hard for a person to deal with their long-term emotional wellbeing if they’re having a lot of difficulty just getting their basic needs met.”

While the contractor reboards Lisa’s busted windows and apologizes for how long it might take to replace them, Mims shakes his head and whispers, “Unfortunately, there are so many barriers to healing. There are no easy fixes right now.”

Despite Lisa’s housing situation being in flux, Mims assures her that he, on behalf of AdHoc and Caring For Crime Survivors, will do everything possible to aid her healing. He reminds Lisa not to worry so much about the damage her home sustained, but to realize the wound she suffered could have been worse. “This kind of thing changes your whole perspective on life,” Mims says.

Lisa is well aware of that, repeatedly expressing how, though she might be anxious about her future, she’s grateful to have a future. She is still alive.

“I just like to step outside a lot and smell the fresh air,” she says—smiling again. 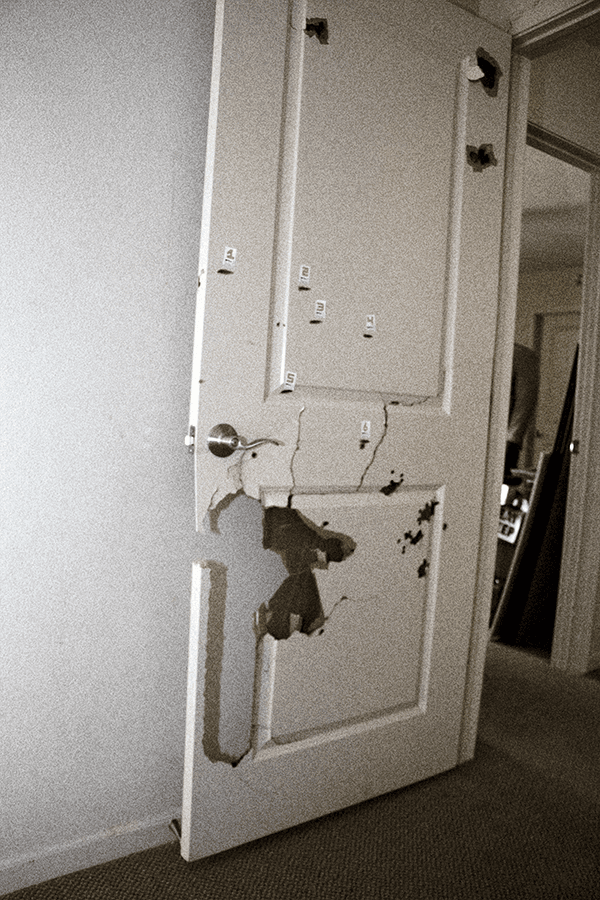 MUCH DAMAGE DONE — This door represents the invasive damage done to Lisa's home.