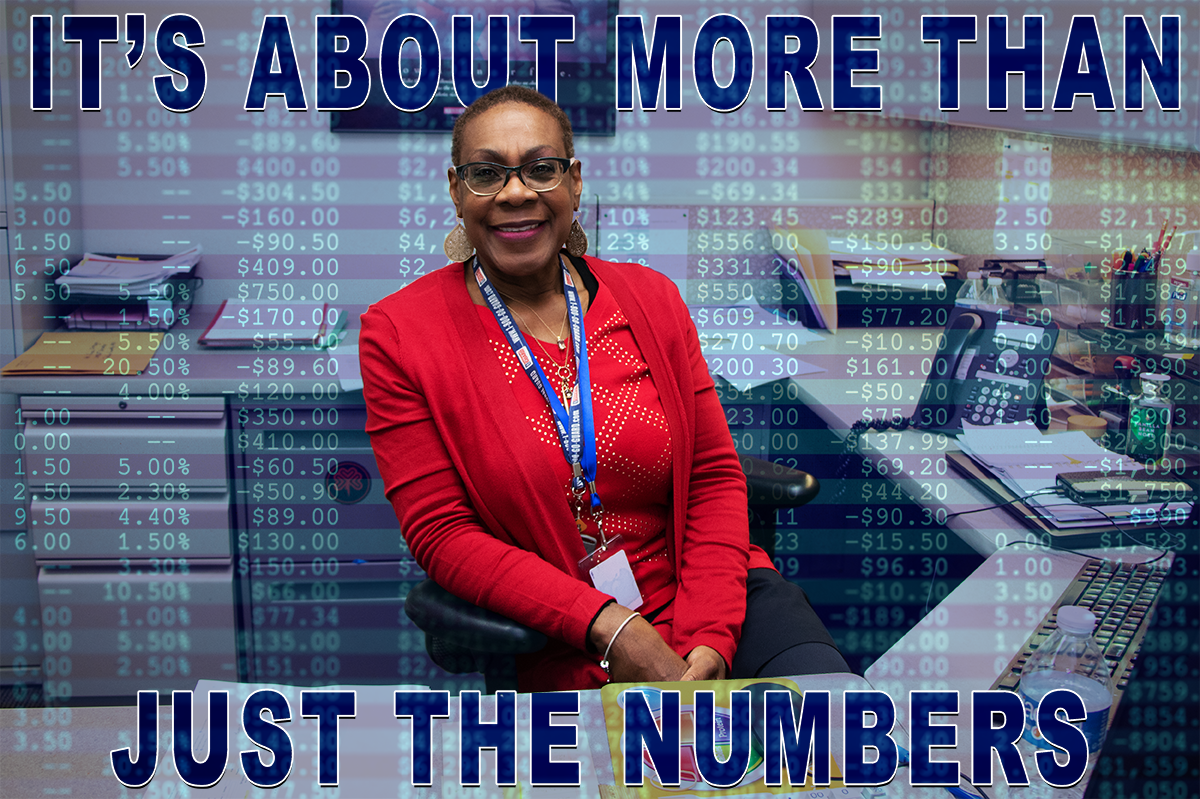 Keron Hopkins rejects each one: “I don’t crunch numbers, I don’t count beans, and what I do isn’t magic.”

In her role as COMBAT’s new Budget Coordinator, Hopkins serves as an accountant, financial analyst and contract administrator—jobs that all entail making sure the numbers add up. And she thrives at developing accounting policies, then implementing them. “I love it, love it, love it,” she says.

“But there’s more to what I do here than that,” Hopkins quickly adds. “I’m, at heart, a communicator. I’m a problem solver. When I come into the office, I’m not just thinking about the numbers. First and foremost, I’m thinking about customer service. I’m here to work with people. How can we help the agencies COMBAT funds succeed? How can we better serve the public?”

Hopkins joined the COMBAT staff Dec. 9. Her more than two decades of experience includes positions with the University of Missouri-Kansas City (UMKC), University of Kansas, George Washington University and the American Academy of Family Physicians. She has managed grants, contracts, budget proposals and multi-million-dollar portfolios; streamlined and modernized financial procedures; and monitored spending to assure compliance with internal and external guidelines.

Hopkins says during her first two months on the job, “We have been creating new financial policies and will be writing those out”—with the end goal being to create an updated policy manual.

'Seeing That Things Are Done Right'

“It’s all about creating greater accountability,” Ortega says. “We all need to be accountable for each cent of COMBAT funding—we being the COMBAT administration and the agencies and county departments that receive COMBAT funding.

“We were fortunate to find someone in Keron who has not only the experience but also the drive,” he continues. “She has gone about her job with professionalism and a determination to see that things are done right—that improvements are made, that the policies are being set and enforced.”

'A Job Worth Fighting For'

Hopkins was not looking for “just any job” when she accepted the offer from COMBAT. She wanted to work for an organization committed to making a difference in the community.

“This is a job worth fighting for,” she says. “I describe COMBAT as being a puzzle. There are lots of pieces—prevention, treatment, anti-violence, law enforcement, social services—and when they all come together they can make a really big difference.”

Hopkins was born and raised in KCK but began to see more of the world a year after graduating from Wyandotte High School. She joined the Army. In three years of active duty, she was a flight operations administrator stationed in Germany and at Fort Campbell (Kentucky), home of the highly decorated Screaming Eagles 101st Airborne Division.

After earning a Psychology degree from Kansas State University, Hopkins career path took her to the east coast for 15 years. She was a fellow at the Smithsonian Institution in Washington, D.C.; earned a degree in accounting from Strayer University (Washington) and a Master of Public Administration from Kean University (New Jersey).

In 2005 Hopkins returned to the Kansas City area to care for her diabetes-stricken mother. She has since earned an MA in Economics from UMKC and spent time (2012-13) studying economics abroad in Brazil.

While she longs to visit Brazil again someday—where communication is not a challenge because she speaks Portuguese—Hopkins is currently focused intently on processing invoices, establishing those new policies and preparing for 2020 funding contracts, which will soon be awarded. That has meant a hectic first two months on the job in COMBAT.

“I’m really looking forward to March, when I should be able to get out of the office and visit our COMBAT agencies,” she says. “I want to meet the people face-to-face I’ve only been able to meet so far through e-mail or on the phone. I want their input. How can we work together better?

“It’s not just about the numbers; it’s about the people, too.”

“I describe COMBAT as being a puzzle. There are lots of pieces—prevention, treatment, anti-violence, law enforcement, social services—and when they all come together they can make a really big difference.”