The Voice Of Experience — He Really 'Gets It'

How many clients have told Larry Beaty that during his 30-plus years as a substance abuse counselor? Probably most. When he tells them he knows what they’re going through and they scoff, he quickly sets them straight: “I do get it. I’ve been around the horn. I know what it is to be homeless, unemployable and broken.”

When he assumes the role as the COMBAT Commission Chairman at the commission’s May 14 meeting, Beaty will draw on not only his decades of counseling experience, but also his personal struggle with addiction. He’ll reach 38 years of sobriety in June.

Beaty was appointed to the commission in January of 2018 and named chairman earlier this month. For him COMBAT’s mission to prevent and treat drug abuse, in addition to reducing violence, is personal.

Alcoholism, Beaty said, cost him his first marriage, then his job as a corrections officer, and eventually left him homeless. He has been sober since 1981 and soon after found his calling as a counselor.

“I drank everything away,” Beaty declared, “and it’s been a tough road up from rock bottom. I spent 3½ years in a halfway house, getting my life back. But counseling others has become my life’s work."

Beaty launched his own counseling service in 1988, after working for the Clay County Drug Court. For 22 years as director of Beaty Counseling Inc. he treated Missouri Department of Corrections parolees with reported substance abuse problems.

Retirement hasn’t stopped him from continuing his life’s work. He is still helping others as a part-time Drug and Alcohol Educator for the Midwest Recovery Center in Kansas City.

Beaty now lives in Lee’s Summit but grew up in KC’s Northeast. He believes the COMBAT initiative to identify crime “hot spots” in neighborhoods like the Northeast will be essential to targeting anti-drug and anti-violence services where they are needed most.

'A Good Feel For What COMBAT Needs To Be Doing'

Beaty noted that he’s talked often with Ortega about the COMBAT director’s 30-year career in the Kansas City Police Department, which included stints working undercover for the Drug Unit. Ortega retired as the KCPD Deputy Chief in 2006.

“Vince has that experience on the criminal justice side of things, but he gets that law enforcement alone can’t solve these problems,” Beaty said. “He has a good feel for what COMBAT needs to be doing going forward.

“You can’t arrest your way out of the problems of drug abuse and violence.”

After many failed attempts at sobriety, Beaty finally took his last drink in 1981 and four years later got remarried. He and his wife, Sheri, recently celebrated their 34th anniversary. They havefive children and 12 grandchildren. 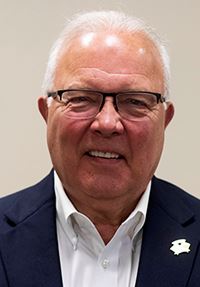 "You can't arrest your way out of the problems of drug abuse and violence."