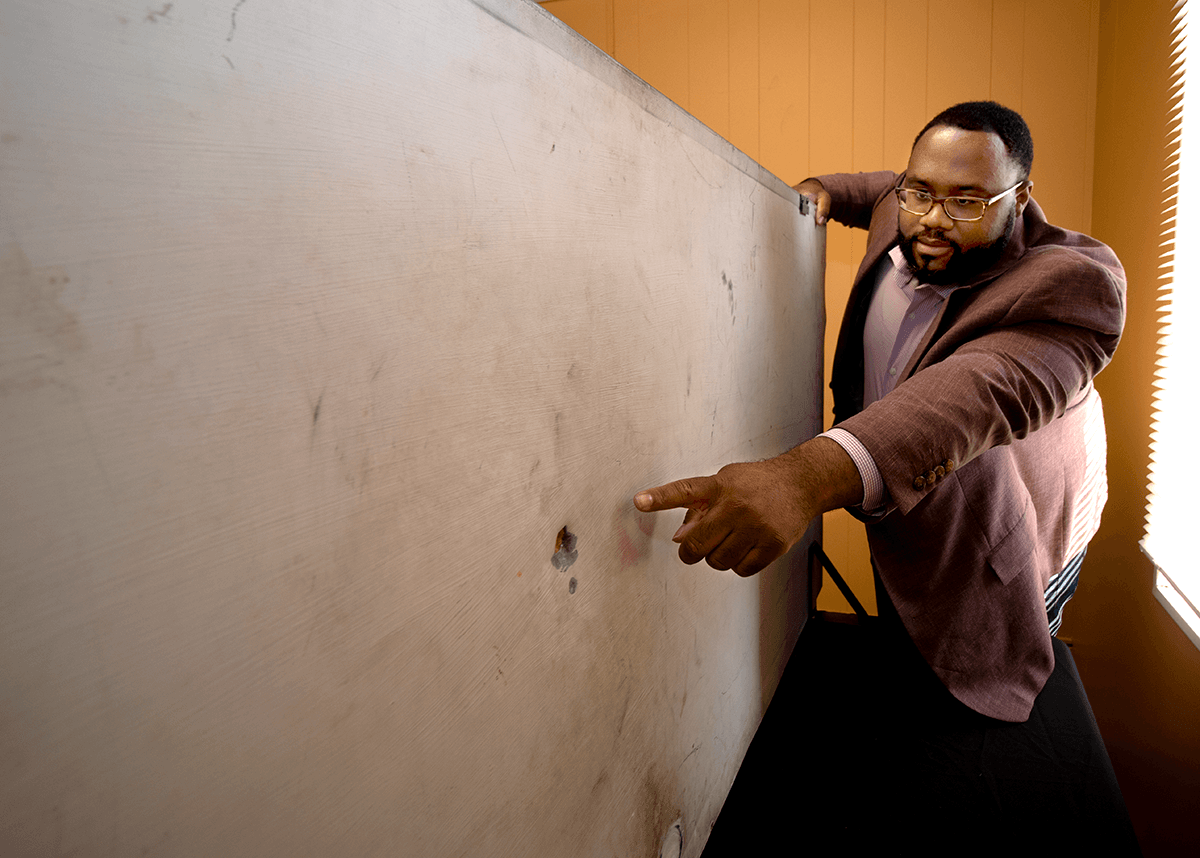 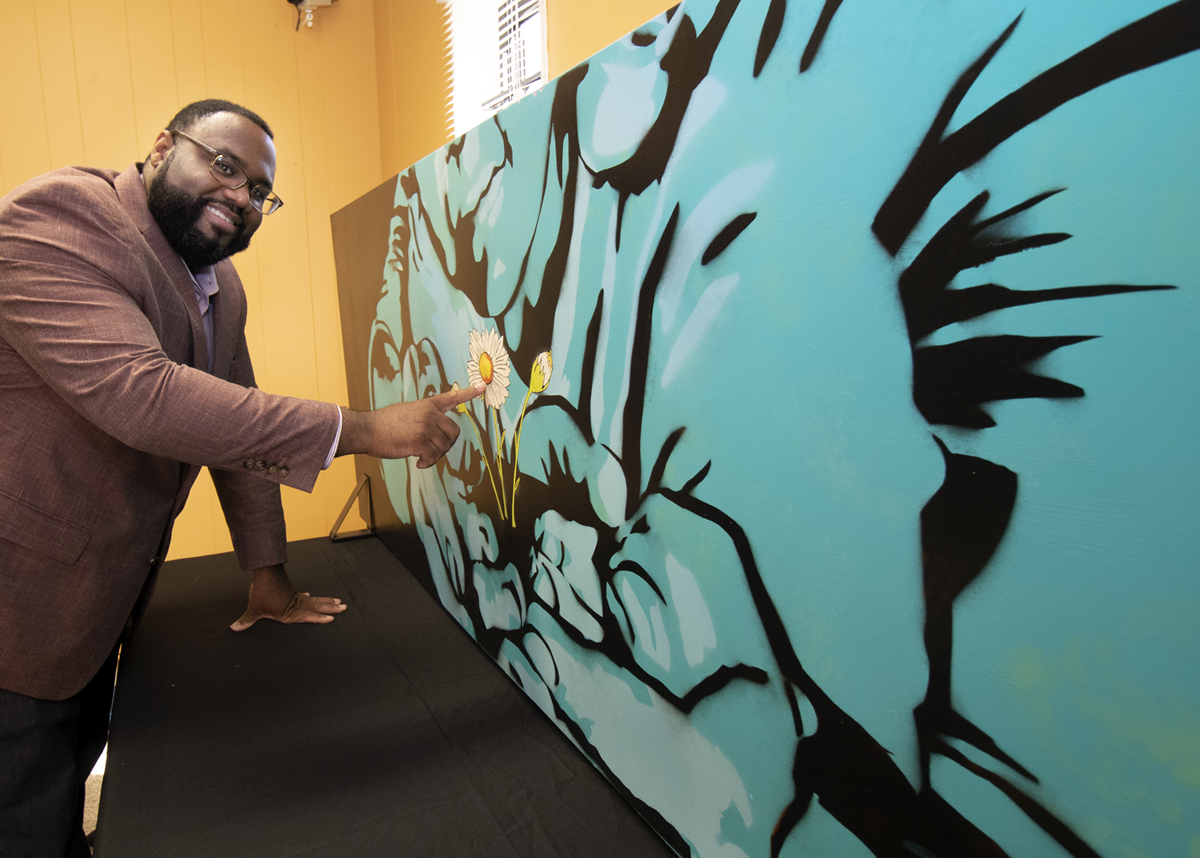 FROM AN UGLY BULLET HOLE TO A BEAUTIFUL FLOWER — Branden Mims, AdHoc's Director of Crisis Intervention, points to a bullet hole in a door removed as part of the Caring For Crime Survivors program. A local artist, however, has transformed the front side of this door into artwork that can later be sold in a fundraiser.
Program Repairs Property Damage & Refers Survivors For Counseling
Joe Loudon • COMBAT Communications Administrator

The bullets “missed.” The only apparent “harm” they had done were the holes left in the walls and a door. No one was “hurt.”

When the Jackson County Prosecutor’s Office introduced the Caring For Crime Survivors program more than four years ago, Branden Mims quickly learned gunfire need not strike a person to inflict pain. The AdHoc Group Against Crime’s Director of Crisis Intervention vividly recalls the moment he first saw the “hurt” a near-miss can cause:

We were assessing the damage done this house from just some random gunfire in the neighborhood. The teenage daughter had covered the bullet holes in her bedroom walls and door with Band-Aids. She didn’t want to see them. She peeled back one of those Band-Aids and started to cry. Before we began this program, I don’t think we realized just how traumatizing it was for people to still have these bullet holes in their homes. These holes are an everyday reminder of what happened to your home, to your family—to how close you or someone you love came to getting hurt, maybe killed.

Caring For Crime Survivors arose from a brainstorming session County Prosecutor Jean Peters Baker and then Jackson County Legislator Alfred Jordan had to address the lack of services provided to many crime victims. (Jordan now serves a COMBAT Commissioner.)

“Although a case might never be passed along to the Prosecutor’s Office for charges,” says Peters Baker, “that doesn’t mean there isn’t anything we can do to help these crime victims become crime survivors who are better able to get on with their lives.”

Often the first step in Caring For Crime Survivors—a program COMBAT funds and the Prosecutor’s Office operates in partnership with AdHoc—is getting a house-turned-into-a-crime-scene repaired, so the family living there can feel at home again.

Unfortunately, the economic realities of many families can make these repairs cost-prohibitive. The damage a bullet does to a house or car might not exceed the family’s insurance deductible but still be more than they can afford, especially during a recession when money for food, utilities and other bare necessities might be scarce.

“That’s where we can come in and help,” points out Marilyn Layton, a Victim Advocate in the Jackson County Prosecutor’s Office.

And the help usually goes far beyond fixing the property damage. 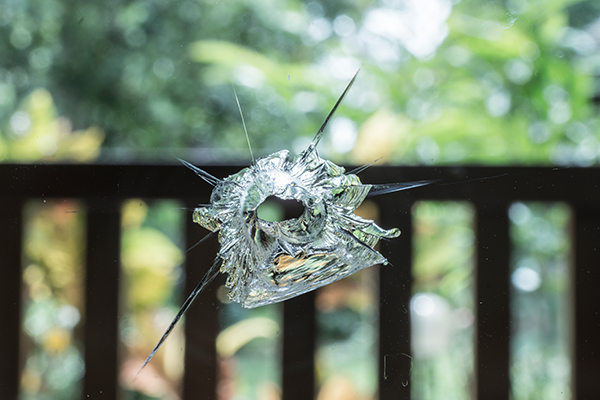 “These holes are an everyday reminder of what happened to your home, to your family—to how close you or someone you love came to getting hurt, maybe killed.” 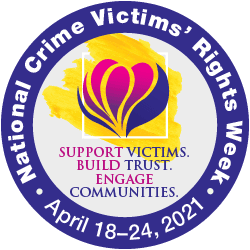 Layton spent 24 years as an advocate for homicide victims and their surviving family members. Her plan had been to retire four years ago when the Prosecutor’s Office started its search for a Community Liaison to get “this new caring program” up and running.

“When this opportunity came available, God said, ‘I didn’t tell you to leave yet,’” says Layton, who credits her spirituality with helping her do a job—for 28 years now and counting—that others might find soul-crushing.

“I’m from the heart of the city,” she continues, “so I thought I’d be a good fit for this new job. A lot of people are afraid of the city. It’s my home. The people we’re caring for are neighbors.”

The care can include seeing that survivors receive trauma-informed counseling or assuring that those who were shot—who survived so-called “bullet-to-skin” wounds—have groceries, transportation to medical appointments, access to financial assistance if their injuries cause them to miss work.

In 2020 AdHoc coordinated repairs to 114 homes through Caring For Crime Survivors, using mostly local contractors and many minority-owned businesses. More than 150 referrals for counseling services were made.

“We were still able to get done last year what needed to be done, despite the pandemic,” AdHoc President Damon Daniel says. “That means there was a lot of violence during COVID. The pandemic is ongoing, so is the violence.”

Helping An Estimated 300 To 400 Survivors A Year

Local police departments have made hundreds of Caring For Crime Survivor referrals to the Prosecutor’s Office. In most of these cases, the criminal investigations have gone cold.

“We had a case where two guys were out in the street trying to kill one another, and they missed each other but shot up four different houses,” says Mims. “The police asked the people what they saw, and they said what most people usually do in these incidents, ‘I saw the floor.’ There aren’t many witnesses in these cases.”

Mims estimates each year 300 to 400 survivors are cared  for through the program he and Layton coordinate “because we get one referral then find out it’s for a family of three or four.”

Says Daniel, “This program shows the Prosecutor’s Office really cares. These are cases they are probably never going to get to prosecute, but they’re working with us to address the needs of people at what may be the most traumatic time in their lives.”

‘Just Talking About It Helps’

In assessing a survivors’ needs during her one-on-one talks with them Layton has observed a pattern: They’ll open up to her about their experience. If they share with her pertinent information that might help resolve their cases, she will pass it along to police detectives.

But that’s not the point.

“When we reach out to the victims, I never ask them about their case and don’t try to get into the details about it,” says Layton. “I always let them be the ones who start those conversations. Sometimes they are so traumatized when whatever happened happened they couldn’t talk about it.

“They might not remember anything that can help solve their case, but after time, just talking about it helps them start to deal with the trauma.”

Letting The Sunshine In

Many families have come to terms with the fact their cases might never be resolved in a court of law. What they would like most of all, according to Mims, is to regain a “sense of normalcy”—something nearly impossible to achieve for many without counseling and for most as long as they must live with those “everyday reminders” of the physical damage.

Mims, who’s also pastor of the Greater Metropolitan Church of Christ located a few blocks from AdHoc’s 31st Street headquarters, shares a story that perfectly symbolizes the light Caring For Crime Survivors can bring into a survivor’s life:

We work with a vulnerable population. People for whom $500 is too much money. There was an older woman whose sliding glass doors had been shot out and were still boarded up more than two years later. She couldn’t afford the $500 or $600. I don’t remember how much it cost, but I’ll never forget when she got referred for this program and we fixed those doors for her. She wept. They were tears of joy because the sunshine had finally come back into her home. 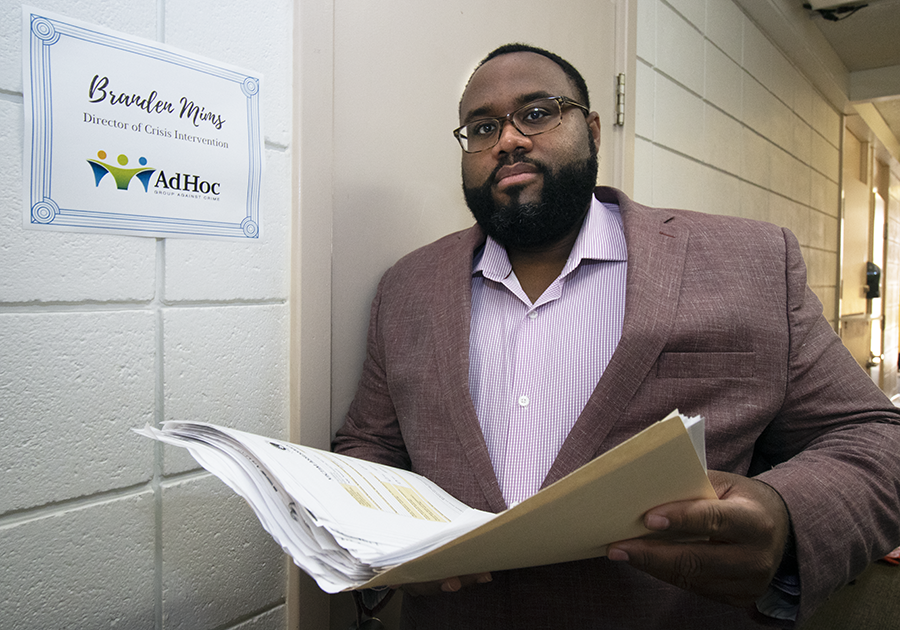 LOTS OF REFERRALS — Referrals for the Caring For Crime Survivors program can quickly fill up a file folder.