Follow the bullet’s path into the body. Repair all the holes left behind. Stop the bleeding. Remove any fragments from the slug splintering and/or bones shattering. Search for other debris—fabric from a shirt?—that might have gotten sucked into the wound.

And save the patient’s life.

Doctors and other medical professionals now realize a patient’s full recovery from a “GSW” (medical jargon for a gunshot wound) involves more than fixing the damage done to bones, muscle, blood vessels and organs. In fact, without other treatment beyond the ER and OR, there’s a good chance—statistically speaking—a gunshot victim might survive today only to have their life violently taken within a few years.

GSW Survivors At High Risk Of Being Shot Again

The findings from a study conducted in Washington State has Jackson County Prosecutor Jean Peters Baker gravely concerned that GSW survivors locally might be suffering the same fate as their counterparts in the Northwest.

Doctors with the Seattle-based Harborview Injury Prevention & Research Center (HIPRC) tracked what became of gunshot victims treated at hospitals throughout Washington. They discovered over a five-year period (2012-17) these GSW patients were, compared to the general public, 21 times more likely to get shot—again—and four times more likely to die in a firearm-related homicide.

“They found out in Washington that a lot of the non-fatal shooting victims they saved only wound up later being fatally shot in another incident,” Peters Baker said. “I don’t believe this trend is unique to Seattle.”

If anything, nationwide the long-term survival rate of GSW patients might even be worse than what the HIPRC researchers found in Washington State. About a third to one half of gunshot wound survivors later die when they're shot again, Dr. Joe Sakran announced at a symposium—Firearm Violence in the United States: A Frank Discussion on an American Public Health Crisis—the University of Kansas Medical Center hosted in May. Dr. Sakran, Emergency General Surgery Director for Johns Hopkins Medicine, is a leading authority on treating firearm violence. (He was inspired to become a trauma surgeon after being shot, at 17, in the throat.)

“We’ve had more than 500 non-fatal shootings in Kansas City alone during the last year,” Peters Baker pointed out, “a bullet striking skin, people having to seek medical care for their wound. Those of us in the legal and medical professions need to better wrap our arms around these individuals and find a way to address their trauma, rather than just having a hospital sew up their bullet holes and send them out the door.” 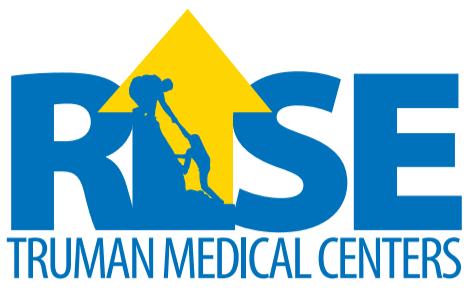 Since Sept. 3, when Project RISE—a COMBAT-funded initiative—was introduced, TMC gunshot patients are given an initial PTSD assessment upon being stabilized and admitted to the hospital or within 24 to 72 hours after being treated and released in the Emergency Department.

“We try to engage people as soon as possible after they’re medically stable,” said Dr. Joah Williams, a clinical psychologist with the TMC Behavioral Health Unit and an assistant UMKC Psychology professor. “We’ve trained nurses to do the at-risk assessment. When we’ve identified who is most at-risk for long-term problems, we get them linked in for some immediate crisis intervention and then some stepped-up preventive care. Then we follow up with them to make sure they are receiving ongoing outpatient treatment if needed.”

• Level 1 begins with the crisis intervention, teaching patients coping skills to deal with the more common reactions to trauma. Dr. Williams describes this level of care as being “psychological first aid.”

• Level 2 involves Dr. Williams and UMKC psychology doctoral students providing “that stepped-up care,” often beginning at the patient’s bedside. The goal is to equip patients with the skills needed for a “psychological recovery.”

• Level 3 care is provided long-term through the Behavioral Health Unit for patients with chronic trauma-related symptoms or other emotional problems.

To Project RISE’s interdisciplinary team, which includes the nurses who conduct the initial screening, TMC Director of Social Work Services Jennifer Schrag and her staff, and his students, Dr. Williams plans to add the chaplains who are often among the first to offer GSW victims’ comfort in the emergency department.

“The chaplains generally respond to all gunshot wounds in the ED,” Dr. Williams said. “They have a history of being able to engage with these people in the immediate aftermath of the trauma they’ve suffered.”

He added the initiative will also seek input and guidance from gunshot survivors with the possibility that some might be recruited to provide “peer counseling.”

“If we think about a broad vision for what we want to accomplish through Project RISE,” Dr. Williams said, “we would hope that through providing more effective and immediate intervention, we can help people recover more fully from their injuries—physically, psychologically and emotionally. They will be able to live longer, happier, more fulfilling lives, so that this trauma doesn’t have to be the defining moment in their lives.

“And we want to avoid those long-term outcomes like they were seeing in Washington State.”