“Our  kids are worrying about being shot in their schools. How many are going to have PTSD? Our kids are thinking like kids in a war-torn nation.” 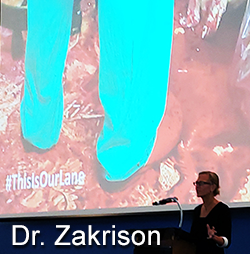 They have blood on their hands. It goes with the job.

“This is what we live to do,” said Dr. Tanya Liv Zakrison, a photo projected on the screen next to her depicting a trauma surgeon standing on a floor smeared with red gore.

She had just described trying to save a man’s life after he suffered 17—seventeen!—gunshot wounds. He survived.

For Zakrison and the other four surgeons who spoke at a day-long symposium May 17 at the University of Kansas Medical Center’s Health Education Building treating gunshot wounds—commonly referred to in medical and legal circles as GSW’s—has become more than a professional obligation. For them this epidemic has gotten personal.

Firearm incidents—murders, suicides, accidents—kill approximately 40,000 Americans a year. Hundreds of thousands more survive being shot, usually thanks to a trauma surgeon. Some of these survivors will later succumb, perhaps years later, due to the lingering effects of their GSW’s. Many—about a third to one half—survive being shot the first time only to later die when they’re shot again.

Breaking the news a loved one has died on the operating table after being shot is the worst part of his job, Dr. Joe Sakran told the medical students, law enforcement officers, activists and concerned citizens attending Firearm Violence in the United States: A Frank Discussion on an American Public Health Crisis.

“I look at the mothers, the fathers, the brothers and the sisters,” said Sakran, Emergency General Surgery Director for Johns Hopkins Medicine, “and I realize what I am about to tell them is going to change their lives forever.”

It’s a conversation a doctor nearly had with Sakran’s own parents.

Having A Gun Pointed At You

For Sakran and the one layperson who spoke at the symposium, author Kathy Shorr, firearm violence doesn’t get much more personal than this: at 17, Sakran was shot in the throat; two men once held a gun on Shorr and her daughter, then a toddler, during a home invasion.

“I know first-hand what it is like to have a gun pointed at you,” said Shorr. “People will talk about what they’d do in that situation—how they’d respond. All you’re thinking is ‘don’t hurt me, don’t kill my child, and get out.’”

She stressed “it’s a horrible feeling to have someone else have your destiny in their hands” because those hands are wrapped around a gun.

That experience—coupled with having an uncle murdered and her grandmother injured by a gunman in the early 1980s—inspired Shorr to leave her job as a New York City photography teacher and embark on a two-year odyssey. She traveled America, meeting gunshot wound survivors, photographing them and collecting their stories.

The end result was a critically-acclaimed book published in 2017, SHOT: 101 Survivors of Gun Violence in America. 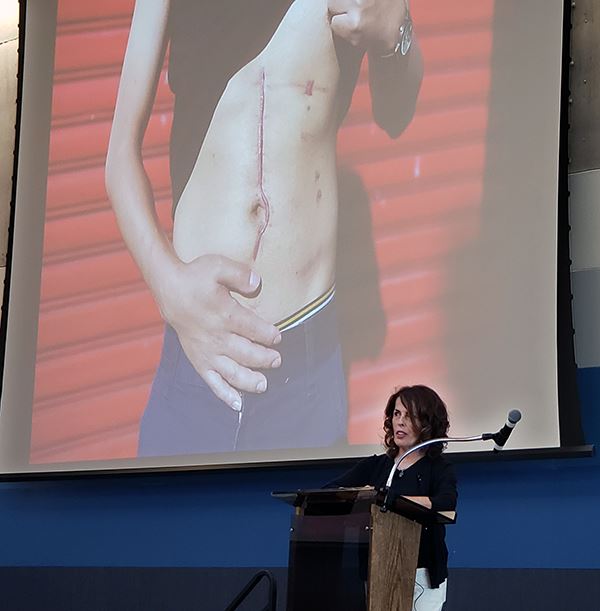 THE SCARS LEFT BEHIND — Kathy Shorr shows the devastation of a gunshot wound.

As a teenager Sakran was typical. He had no sense of his own mortality, nor any real vision of what he wanted to do with the rest of his life. Then he got shot.

Surgeons graphed a vein from his leg to repair his carotid arteria. While he was recovering, Sakran’s dad told him, “You can feel sorry for yourself, or you can take this horrible incident and try to impact other people’s lives.”

Sakran trained to be a doctor at Inova Fairfax Hospital in Virginia, where the surgeons who mentored him were the same ones who had saved his life. He is now a leading expert on trauma, hoping to have an impact on reducing firearm violence in the United States.

He and his colleagues realize gun violence and gun control can be politically-charged subjects, but they are confident common ground can be found.

‘We Didn’t Take Everybody’s Car Away’

Traffic accident fatalities represented a public health crisis in the mid-20th Century, Dr. Sakran pointed out. “We didn’t take everybody’s car away,” he said. “We installed seat belts and air bags, made our roads safer. We enforced drunk driving laws.”

Sakran stressed if more guns were properly secured—unloaded, locked up, beyond a little one’s reach—the number of accidental shootings involving children would drop substantially: “Nearly 5 million children live in homes with unlocked and loaded guns. You talk to any responsible gun owner and they will tell you that is unacceptable.” (Sakran prefers using the word “unintentional with regard to firearm violence because ‘accidental’ implies it wasn’t preventable.”)

‘Ever Heard Of Fair Haven Union?’

Extreme Risk Protection Orders (ERPO), a.k.a. “red flag laws,” are another preventive measure that Sakran believes are widely supported and already have saved lives in states where they’ve been enacted. An ERPO allows authorities to temporarily seize the firearms of  people deemed to be a threat to themselves or others and also prevent these individuals from acquiring new guns.

No one raised their hand.

Vermont authorities issued an ERPO when investigating a Fair Haven Union student who had written in graphic detail about his desire to kill more people than any previous school shooter. He never got the opportunity to act out his Journal of an Active Shooter.

“This is an example of how these laws work,” Sakran said, “and why you have never heard of Fair Haven Union High School.”

Ten states—raising the total to 15 throughout the country — adopted red flag laws after the Stoneman Douglas High School shooting in Parkland, Fla. claimed 17 lives on Valentine’s Day 2018. ERPO legislation has been purposed but not approved in Missouri. 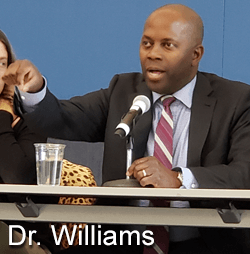 Dr. Brian Williams has personal experience treating mass shooting victims. He was supposed to be off duty the night of July 7, 2016, but he, instead, worked a shift for a friend at Parkland Hospital in Dallas when one GSW report after another began pouring into the ER.

A gunman was firing upon Dallas Police officers assigned to provide security at a public protest following two controversial police shootings of African American men, Philando Castile on July 6 in Minnesota and Alton Sterling on July 5 in Louisiana.

At the KU symposium Williams described going into a hospital corridor and breaking down in tears after the immediate emergency subsided. But Williams said treating CWS on a daily basis is enough to “change your DNA” and made him an advocate against firearm violence: “We are shooting black men. They are dying, being forgotten. Now we’re shooting police officers. Where does it end?”

‘Kids In A War-Torn Nation’

Anyone can become a victim of gun violence, Shorr emphasized repeatedly. And the trauma is touching nearly all American’s lives. She is especially worried about children and the long-term effect stress and fear will have on them as they live in an environment where active shooting drills are now routine for most schools—a necessary precaution against the concern we might be next.

“You go into a daycare center and wonder, ‘Is that glass bulletproof?’” Shorr said, adding, “Our kids are worrying about being shot in their schools. How many are going to have PTSD? Our kids are thinking like kids in a war-torn nation.”

According to the Centers For Disease Control, an average of 51 children (from infants to 19-year-olds) are shoot every day in America. The youngest survivor featured in SHOT was a third grader.

During the symposium, Shorr shared slides showing 28 of the 101 survivors in her book. Two were young girls from Kansas City, one a 15-year-old unintentionally shot by a friend “teasing her” with what they both thought was an unloaded revolver belonging to the friend’s father.

Shorr’s subjects were a cross-section of Americans—from rural and urban communities, various ages, all races represented. They included a bus driver from Philadelphia who had survived being shot three different times, but lost a son killed in a shooting, and multiple victims of domestic violence.

A Survivor No More

“The domestic violence is something that really shocked me,” Shorr said.

“Why don’t these women just leave these guys, these guys who are doing terrible things to them?” she continued. “Their normal is not our normal. We shouldn’t judge women in these kinds of relationships. For someone not in that situation, it is almost impossible to understand.”

For one woman in SHOT, her “normal” was being abused for four decades by the man she met at 13 and married at 15. Her husband shot her when she finally tried to leave him.
Another domestic violence survivor whose photo Shorr shared is no longer a survivor.

In 2014 Shirley Justice was walking out of an Indianapolis daycare, where she had just dropped off her daughter, when her ex-husband approached her. He shot her 14 times.

Shorr’s photo portrays Justice in shadow, but her bare abdomen, covered in scars, is visible. She endured multiple surgeries, yet still had several bullets in her body when her ex-husband was tried in July 2017 for attempted murder. Upon his conviction, Shirly Justice issued a statement, saying, “I am very happy to put this behind me and finally start focusing on healing, life and loving my girls.”

Her life was over less than seventh months later—her death attributed to the 14 gunshots that inflicted damage which never entirely healed.

KC 5th In The Nation 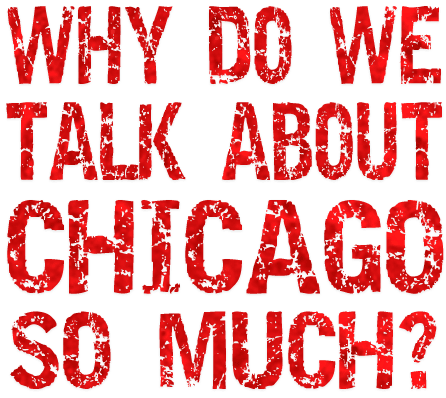 What a grim way to start the day—at 7:30 a.m.—with statistics like these:

• 40,000 deaths in American due to gun violence annually.

• Kansas City having the fifth highest murder rate (per 100,000 people) in the country.

• And the city on the opposite side of Missouri, St. Louis, having the highest.

Dr. Robert Winfield cited these states to open the May 17 symposium he organized— Firearm Violence in the United States: A Frank Discussion on an American Public Health Crisis.

“How do we stop losing hundreds of Kansas Citians and 40,000 Americans a year to firearm violence?” Winfield, a University of Kansas Medical Center trauma surgeon, pondered out loud. (The KU School of Medicine Bohan Visiting Professor Program and the KU Department of Surgery sponsored the symposium. A KU Endowment grant funded the event attended by medical students, law enforcement officers, activists and concerned citizens.)

Among the 40,000 Americans killed in firearm incidents each year, about 2,900 are children, according to the Centers For Disease Control and Prevention. Another 17,000 kids (infants to teenagers) will survive being shot.

“What are our acceptable number of firearm deaths?” Winfield asked. “Can we just accept a certain number of people are going to die at the end of a gun?”

“Why do we talk about Chicago so much?” Winfield wrote on a PowerPoint slide showing Cook County's homicide and firearm fatality rates compared to Jackson, Wyandotte, St. Louis and other counties. 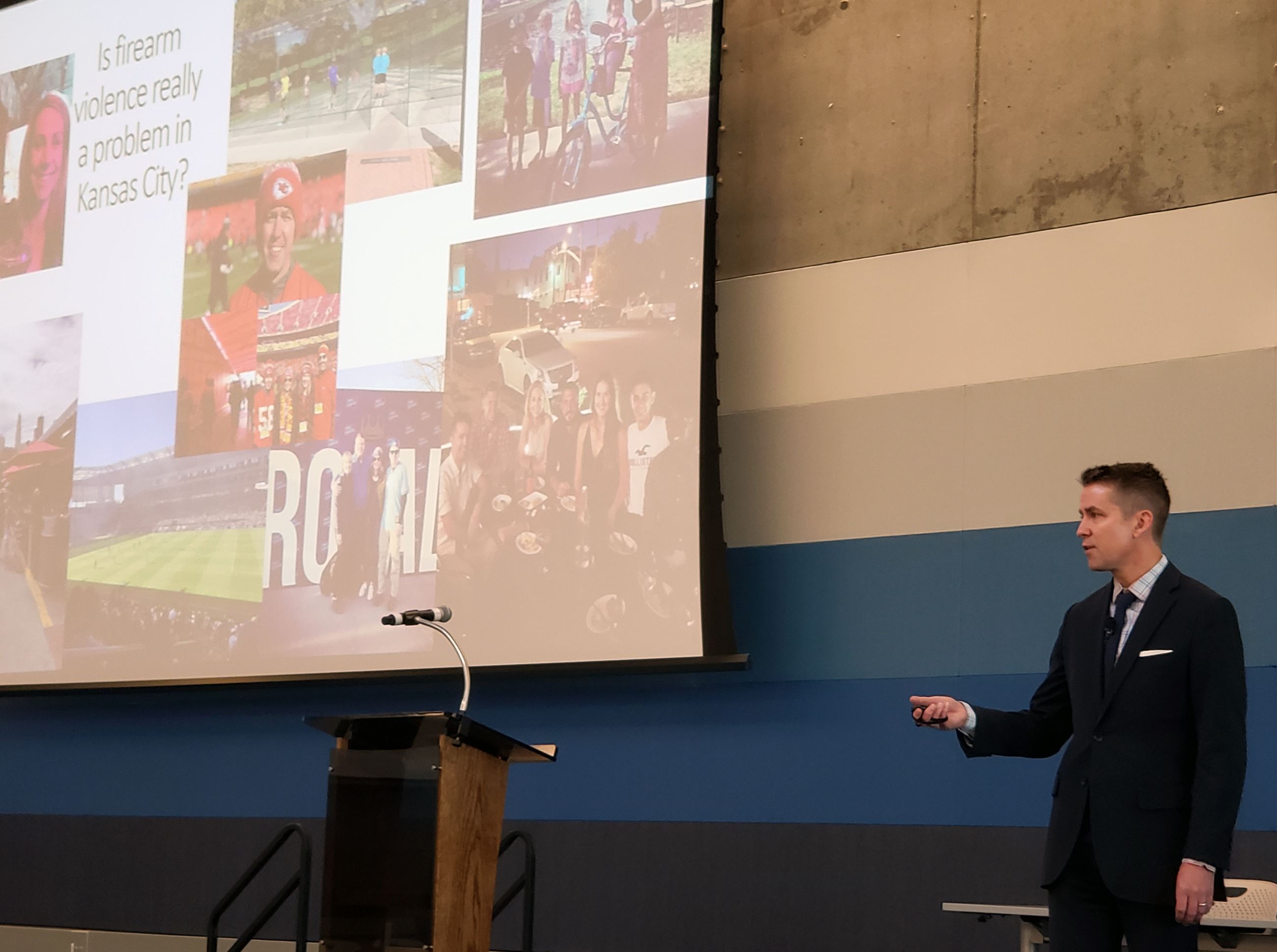 THE ANSWER WOULD BE "YES" — To start the May 17 symposium Dr. Robert Winfield poses this question in his presentation: "Is firearm violence really a problem in Kansas City?"

“If the human toll isn’t enough,” Dr. Joe Sakran from Johns Hopkins tried to put a dollar figure on American’s gun violence epidemic. The average patient admitted with a gunshot wound will have a medical bill exceeding $95,000. The national “societal cost” due to firearm injuries—from lost wages, health care and more—between 2006 and ’16 was estimated at $174.1 billion, according to a medical study Sakran cited.

But as a panel discussion brought the day-long symposium to a close shortly before 5 p.m., Winfield noted the need to go beyond statistics—the number of people killed every year, the hundreds of thousands more injured—“and humanize this problem.”

Discussions like those on May 17 are needed, he stressed, “to go beyond the headline on page 3 of the newspaper or a 30-second clip on the evening news about the shootings we see happening every day right here in Kansas City.”