Headlines about suicides linked to bullying have become "regrettably common," the Centers for Disease Control and Prevention (CDC) notes in a recent report it prepared for teachers and school administrators.

If there's just a single thing anyone—whether you're an educator, parent or simply a concerned human being—ought to take from The Relationship Between Bullying and Suicide is this clear fact: "Youth who report frequently bullying others and youth who report being frequently bullied are at increased risk for suicide-related behavior."

The CDC defines "suicide-related behavior" as committing suicide or attempting and/or contemplating taking one's own life. Even kids who only witness and are not directly involved in bullying, the CDC points out, are vulnerable to "feelings of helpness and [have] less [a] sense of connectedness and support from responsible adults."

Excerpt From The Relationship Between Bullying and Suicide:

What We Know about Bullying and Suicide Together

• We know enough about the relationship between bullying and suicide-related behavior to make evidence-based recommendations to improve prevention efforts.

What We DON’T Know about Bullying and Suicide

Recent attention focused on the relationship between bullying and suicide is positive and helpful because it:

1. Raises awareness about the serious harm that bullying does to all youth involved in bullying in any way.

2. Highlights the significant risk for our most vulnerable youth (e.g. youth with disabilities, youth with learning differences, LGBTQ youth).

3. Encourages conversation about the problem of bullying and suicide and promotes collaboration around prevention locally and nationally.

However, framing the discussion of the issue as bullying being a single, direct cause of suicide is not helpful and is potentially harmful because it could:

1. Perpetuate the false notion that suicide is a natural response to being bullied which has the dangerous potential to normalize the response and thus create copycat behavior among youth.

2. Encourage sensationalized reporting and contradicts the Recommendations for Reporting on Suicide (reportingonsuicide.org) potentially encouraging copycat behavior that could lead to “suicide contagion.”

3. Focus the response on blame and punishment which misdirects the attention from getting the needed support and treatment to those who are bullied as well as those who bully others.

Still, a report of a young person who takes his/her own life and leaves a note pointing directly to the suffering and pain they have endured because of bullying is shocking and heartbreaking. While a young person’s death by suicide is a tragedy and both bullying and suicide-related behavior are serious public health problems, our response to such situations must reflect a balanced understanding of the issues informed by the best available research.

It is particularly important to understand the difference between circumstances being related to an event versus being direct causes or effects of the event. To explore this idea, let’s look at a similar but much simpler example:

In the case of drowning deaths among children, those who are not directly supervised by a competent adult while swimming are more likely to die by drowning than those children who are directly supervised. While the lack of adult supervision does not directly cause a child to drown, it is a critical circumstance that can affect the outcome of the situation.

Just as with preventing deaths by drowning, for bullying and suicide prevention, the more we understand about the relationship between circumstances and outcomes the better decisions we can make about what actions to take to prevent bullying and suicide-related behavior.

So, if bullying doesn’t directly cause suicide, what do we know about how bullying and suicide are related?

Bullying and suicide-related behavior are both complex public health problems. Circumstances that can affect a person’s vulnerability to either or both of these behaviors exist at a variety of levels of influence—individual, family, community, and society. These include:

• lack of connectedness to school/sense of supportive school environment

• alcohol and drug use

If, however, students experience the opposite of some of the circumstances listed above (e.g. family support rather than family conflict; strong school connectedness rather than lack of connectedness), their risk for suicide-related behavior and/or bullying others—even if they experience bullying behavior—might be reduced. These types of circumstances/situations or behaviors are sometimes referred to as “protective factors.”

In reality, most students have a combination of risk and protective factors for bullying behavior and suiciderelated behavior. This is one of the reasons that we emphasize that the relationship between the two behaviors and their health outcomes is not simple. The ultimate goal of our prevention efforts is to reduce risk factors and increase protective factors as much as possible.

The bottom-line of the most current research findings is that being involved in bullying in any way—as a person who bullies, a person who is bullied, or a person who both bullies and is bullied (bully-victim)—is ONE of several important risk factors that appears to increase the risk of suicide among youth. 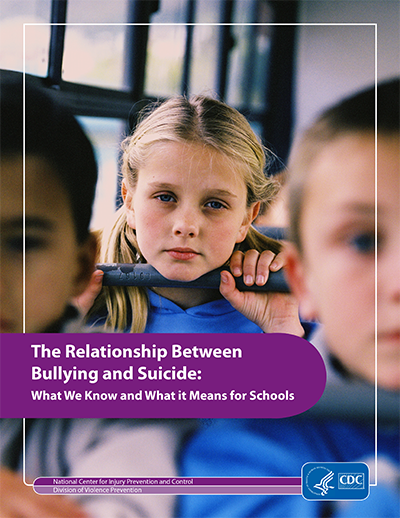 Download the Centers For Disease Control and Prevention report: The Relationship Between Bullying and Suicide (PDF)