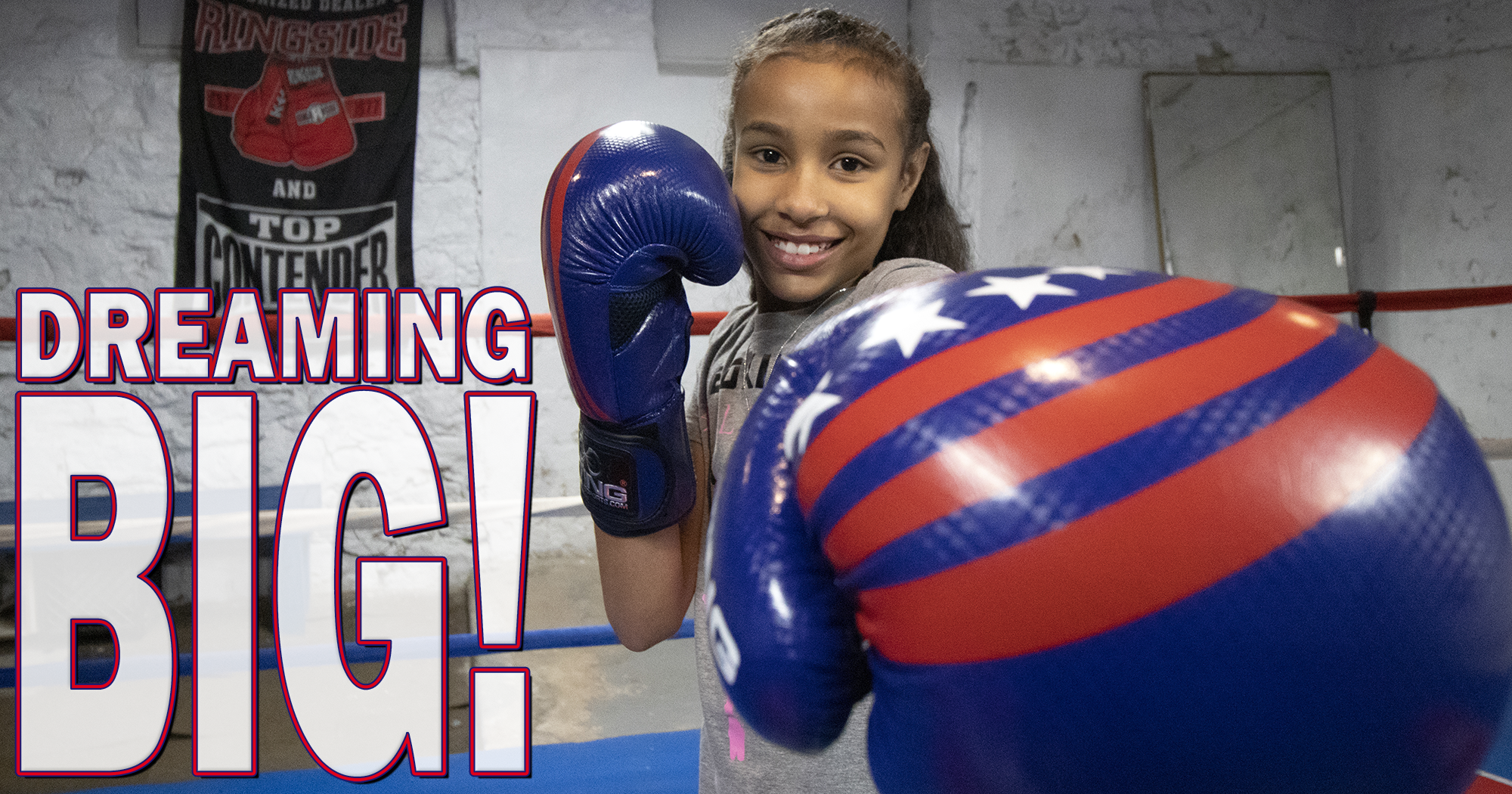 Brijhana Epperson is a graceful ballerina. Floats like a butterfly. But she also throws a nice punch. Stings like a bee.

The shirt she wears says it all: The Boxing Ballerina.

Bri is a little girl from Kansas City with big dreams that include boxing in the 2028 Olympics and someday opening a combination dance studio/boxing gym. The way she carries herself—so poised and mature—will leave you asking her, “Are you sure you’re only 10?”

Bri started taking ballet at 5, then began boxing three years later. Her father, Courtney Epperson, steered her toward boxing as a means of teaching her some self-defense techniques. One day, Brijhana asked him, “Am I ever going to box anyone else?”

And thus began a journey to her becoming ranked No. 1 in the nation for her weight class and age division, a title she earned after winning the National Junior Olympics. “It all feels so amazing, and it’s an honor to hold that title,” Bri gushes.

Bri is a shining example of how impactful COMBAT’s prevention efforts can be. She was a ballerina through a COMBAT-funded program at Kansas City Friends of Alvin Ailey and now trains through the COMBAT-funded youth programs at the Whatsoever Community Center.

Bri recently received the prestigious Children’s Mercy Rising Star Award. “I didn’t know what to think,” she says of being selected for that honor. “I never thought that it would happen. But I was also bouncing off the wall excited. It’s amazing how far boxing can take you.”

For Bri the best thing about boxing is traveling to new places and meeting new people. She has competed in Columbus, Ohio; Lake Charles, Louisiana; and Madison, Wisconsin.

Courtney Epperson says training his daughter is easy because she is willing to work and listen. “She’s a driven child, and she’s goal-oriented,” he explains. Balancing boxing and ballet—she hasn’t given up dancing to pursue boxing—and studying has also helped Bri develop her time management skills at an early age, points out Courtney, who homeschools his daughter and sons. 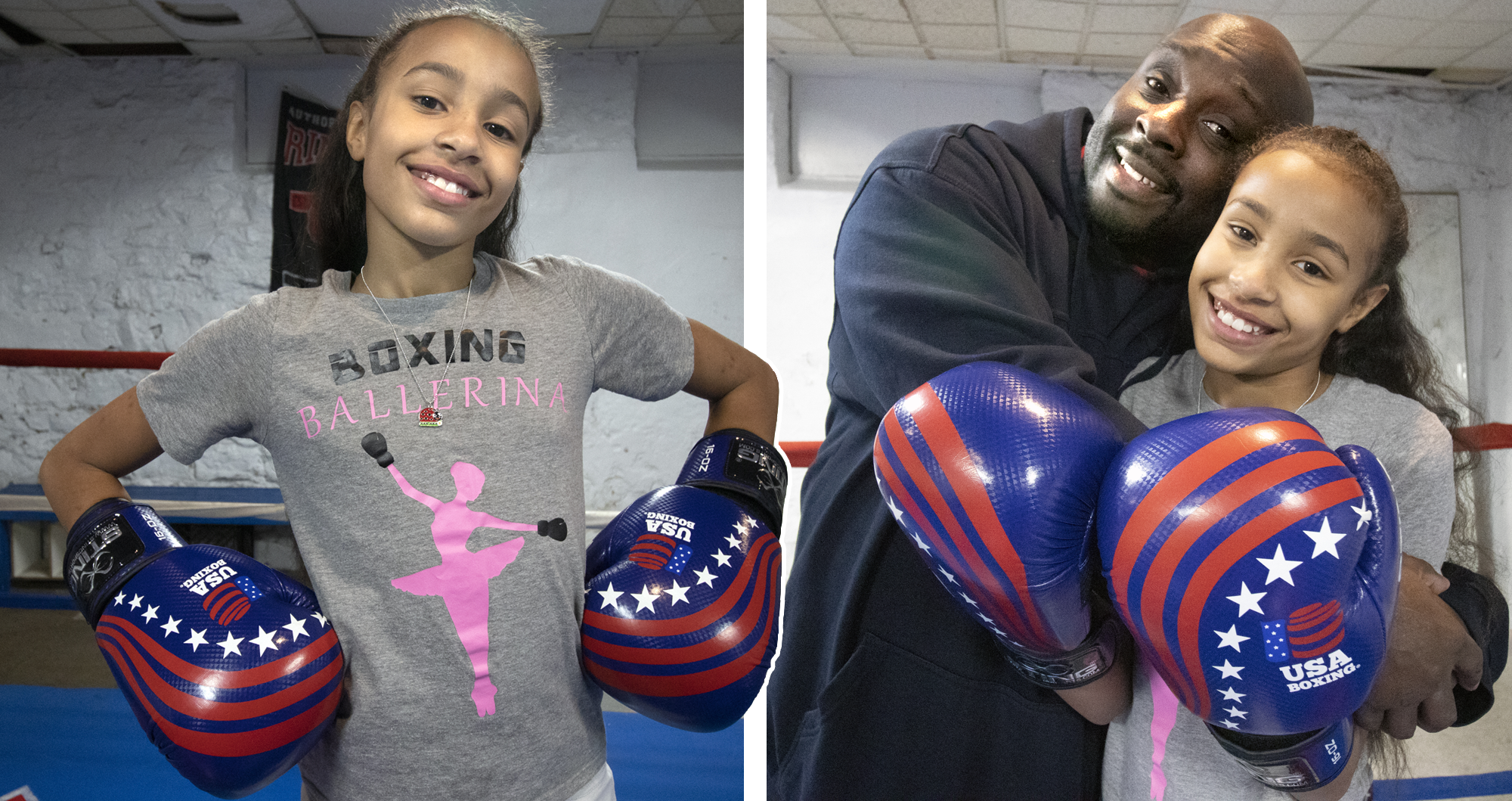 IN HER CORNER — Brijhana Epperson (a.k.a. "The Boxing Ballerina") knows she will always have her father, Courtney, in corner, supporting her as she pursues dreams of boxing for Team USA in the Olympics and opening a combination dance studio/boxing gym.

Boxing has made her a tougher person, Bri says. She feels strong and brave. Her father says the sport has really given Bri a new level of confidence. “Her confidence level has shot through the roof,” he declares with a proud smile. “She’s calm and confident, and it’s pretty amazing to watch.

And Bri has become a magnet enticing more girls to lace up the gloves and join the Whatsoever Boxing Club. “We now have five other girls she has brought into the program,” says Eddie Guillen, Whatsoever’s Director of Youth Services.

'Keep It In The Ring'

Gascich and Guillen shake their head at the notion that teaching children boxing—a sport that demands discipline, fitness, focus, self-control—is somehow incompatible with COMBAT’s violence prevention mission. They stress to everyone who steps into the ring at the Whatsoever Community Center that the skills they’re being taught are never to be used outside the ring except in self-defense.

“I know people hear ‘boxing’ and think, ‘That’s violence,’” says COMBAT Director Vince Ortega, “but a youth boxing program like Whatsoever’s will teach a kid lessons beyond throwing hooks, uppercuts and jabs. They’ll teach kids to set goals, work hard, respect their peers, eat well and get in shape—and to ‘keep it in the ring.’”

Getting kids to adopt a healthy lifestyle—to put down the video game controller and really start moving—can, Gascich emphasizes, prevent them from choosing self-destructive behaviors like using drugs or getting into fights.

“We’re all about prevention here,” the Whatsoever Executive Director says. “We want to get the kids on the right track, so that they will never need the other services COMBAT funds. They won’t need drug treatment; they won’t wind up in drug court.”

Instead, they might wind up going places like Bri has. She has set lofty goals, with the ultimate destination for her boxing journey being the XXXIV Olympiad in Los Angeles, when she will be all of 19.

Beyond LA, Bri dreams about B2. The Boxing Ballerina (a.k.a. “B2”) studio/gym she’d like to someday open will teach girls dance and self-defense—to plié and to counterpunch.

It is, indeed, a big dream for a little girl well on her way to becoming a remarkable young woman—truly a rising star—who has already learned some valuable life lessons.

Bri says she isn’t scared when she steps into the boxing ring, nor does she fixate on winning and losing because “I know I can learn from both the losses and the wins.”

For Bri it’s about seeking to become the greatest she can possibly be. She gives new meaning to “floats like a butterfly” as she pirouettes on her toes with boxing gloves on her hands—and a smile on her face.

Beyond LA, Bri dreams about B2. The Boxing Ballerina (“B2”) studio/gym she’d like to someday open will teach girls dance and self-defense—to plié and to counterpunch.