A person with a mental illness is far more likely to be the victim, rather than the perpetrator, of a violent crime.

“In fact, people with severe mental illnesses are over 10 times more likely to be victims of violent crime than the general population.”

In the wake of a mass shooting, like the Valentine’s Day rampage that claimed 17 lives at a Parkland, Florida, high school, much attention will be placed on the gunman’s mental state. The general assumption is only a “mad man” would do something so heinous—so senseless.

“The concept that mental illness is a precursor to violent behavior is nonsense,” Dr. Louis Kraus, Chief of Psychiatry at Chicago’s Rush University Medical College, told PBS News Hour in a report following the Parkland massacre.

‘Not Guilty By Reason Of Insanity’ – A Rare Verdict

Prior violent actions (and attitudes), previous criminal behavior, and substance abuse—rather than focusing predominately on mental health—are more pertinent indicators, according to Kraus, that a person might be capable of extreme violence.

“The vast majority of gun violence is not attributable to mental illness,” stated Kraus.

An analysis of 235 mass killings, dating back to 1913, concluded that only 22% of the perpetrators could be considered “clearly mentally ill.” The majority were “rage-filled, grudge-holding men” who carefully planned their attacks, said psychiatrist Michael Stone who compiled the comprehensive database.

In courtrooms across America, only 1% of homicide cases result in a legal determination of “not guilty by reason of insanity.”

“Mental illness plays no part in the majority of violent crimes committed,” concluded the Canadian Mental Health Association. “The assumption that any and every mental illness carries with it an almost certain potential for violence has been proven wrong in many studies.” 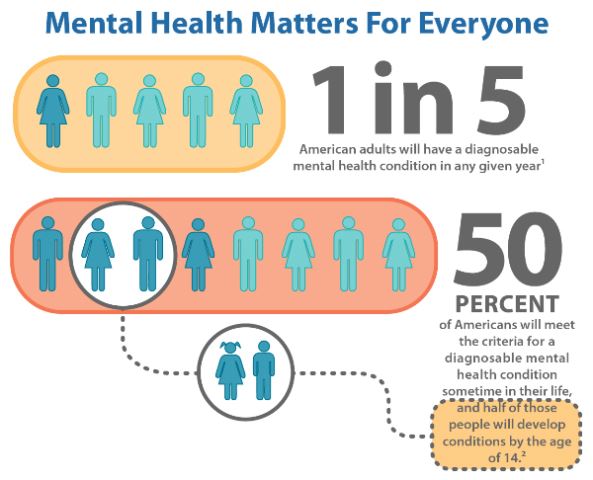 The many stigmas associated with having a mental illness—especially the perception that such an illness might make one dangerous—often prevents individuals from seeking care, notes the National Institute of Mental Health (NIMH). According to the NIMH, one in five American adults has a mental health issue, with one in 25 living with a serious illness such as schizophrenia, bipolar disorder or major depression.

Suicide is the 10th leading cause of death in the United States, accounting for 41,000 lives lost each year—more than double the number lost to homicide.

People often don’t get the mental health services they need because they don’t know where to start.

If you do not have a health professional who is able to assist you, use these resources to find help for yourself, your friends, your family or your students.

If the situation is potentially life-threatening, get immediate emergency assistance by calling 911, available 24 hours a day.

If you or someone you know is suicidal or in emotional distress, contact the National Suicide Prevention Lifeline. Trained crisis workers are available to talk 24 hours a day, 7 days a week. Your confidential and toll-free call goes to the nearest crisis center in the Lifeline national network. These centers provide crisis counseling and mental health referrals.